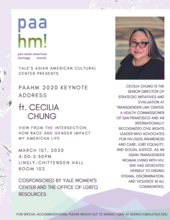 Event time:
Sunday, March 1, 2020 - 4:00pm to 5:30pm
Location:
Linsly-Chittenden Hall 102 See map
Event description:
In light of 50WAY150, Pan Asian American Heritage Month 2020 in March will focus on examining issues of gender equity within Asian and Asian American communities. We are honored to have a fierce activist and icon like Cecilia Chung deliver the keynote address. Cecilia Chung is the Senior Director of Strategic Initiatives and Evaluation at Transgender Law Center, a Health Commissioner of San Francisco and an internationally recognized civil rights leader who advocates for HIV/AIDS awareness and care, LGBT equality and social justice. An immigrant from Hong Kong, Cecilia has lived in San Francisco for over 20 years where she has worked locally and internationally to advance equality and justice. During that time, she has broken ground in a number of ways including: being the first transgender woman and first Asian to be elected to lead the Board of Directors of the San Francisco Lesbian, Gay, Bisexual, and Transgender Pride Celebration; the first transgender woman and first person living openly with HIV to Chair the San Francisco Human Rights Commission; and, an architect of the nation’s most ambitious publicly funded program addressing economic justice within the transgender community. Her community service spans over two decades. In 1994, she was a member of San Francisco’s Transgender Discrimination Task Force, which documented widespread discrimination against transgender people through a groundbreaking report. The work of the Taskforce led the City to adopt many pioneering anti-discrimination ordinances and policies. During her tenure as President of the SF Pride Board, she led the organization in achieving a new standard of inclusion and excellence. In 2004, as a founding producer of Trans March, she helped organize one of the world’s largest annual transgender events which has since been replicated in cities across the U.S. In 2005, she became the first Deputy Director of the Transgender Law Center and is widely credited with shaping the organization’s mission and programs. In 2004, Mayor Gavin Newsom appointed Cecilia to the Human Rights Commission where she served for seven years before Mayor Ed Lee appointed her to the Health Commission. Cecilia’s life story was portraited in ABC’s miniseries, When We Rise. As an Asian transgender woman living with HIV, she has dedicated herself to ending stigma, discrimination, and violence in all communities.
Contact:
Asian American Cultural Center
Tags:
Diversity & Inclusion, Student Life, University Events, Yale & New Haven, Talks & Lectures
Additional NavigationClose